Make Over for Big Bad Bite by Jessie Lane

Big Bad Bite by Jessie Lane has had a make over!!!
Check out this announcement from the author:

“We're excited to announce that Big Bad Bite had a makeover! Inside and out! We have a sexy new cover featuring our favorite Wolf, Adam, AND Big Bad Bite was sent off and edited by the amazing girls at C&D Editing.
Some might wonder, "Has the story changed?"
The answer to that would be yes and no. No, because the story line is still the same. Yes, because it no longer has those pesky grammatical errors, info dumps were cut down, inconsistencies were caught, and best of all, a tiny scene was added! Overall, it's a better story, but still has a kick ass, snarky heroine Jenna, and the snarly, but lovable, Adam who wants her.

So, if you haven't picked up your copy of Big Bad Bite yet, then go get it today!” 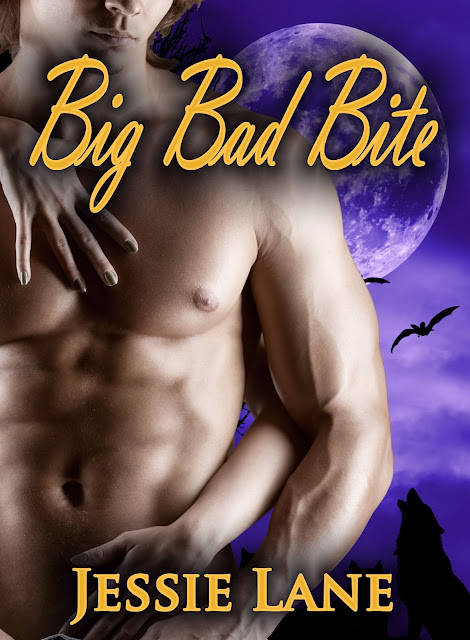 What would it be like to live in a world where you are considered abnormal to those who are above the norm?

Jenna O’ Conner has been taught her whole life to hide from everyone. Never to let anyone to close enough to know that she would prefer a shotgun for her birthday over of a bouquet of roses. She’s been smothered by her over protective family so that no one learns what she truly is. Which is not human. Nor, is she considered the norm for the supernatural Other community that is benevolent enough to share this world with the humans.
In a desperate attempt to live her own life away from the small town she was raised in, Jenna obtains her dream job as the newest member on the Wilmington Police Department’s SWAT Team. What she didn’t predict was that she would run into trouble her first day on the job, in the form of a deadly, mouthwatering man named Adam McPhee. Who is also not human, but more like a wolf walking around in human skin. He’s determined to figure out exactly what Jenna is, which unbeknownst to him, could very well put her life in danger. He’s also determined to have her all to himself.
As if that wasn’t enough for Jenna to deal with, bad news blows into town. A group of extremist Shifters who think humans are cattle and factions of Others worldwide should stay within their own species - never to intermingle. Chaos ensues. Jenna has to find a way to shut them down, but in the process of trying to do that, discovers things about herself that even she never thought was possible.
Who said the wolf was what you had to worry about?
Welcome to the real world.

Consider yourself linked up:

and because I can and I know you'll love it - check out this excerpt!

Weaving through the crowds, Jenna sees Amy tucked in between two different men, dancing with her hands stroking the pecs of one wolf’s chest as she kisses him, their teeth clashing and tongues sliding together seductively. The second wolf tightens his grip on her hips to grind his groin into her ass. Jenna may be a virgin, but she isn't shy about the prospect of sex. The three bodies entwining in their passionate dance is enough to amp up her already throbbing core.
Pushing through the edges of the crowd, her eyes find Clay at their table, whispering into the ear of an exceptionally attractive blonde. It looks like the entire club is here to hook up tonight. Keeping her original destination of the bar in sight, Jenna’s feet carry her even closer to her goal when a large hand grabs her arm, swiftly moving her into a small, dark alcove, halfway to her destination.
Hands crush her to a masculine chest and Adam’s aroused scent overwhelms the area. His left hand wraps around her waist, landing low on the small of her back, while his right hand grabs the back of her neck, angling their faces closer together. His lips are hovering hesitantly over her own as if he is giving Jenna that scant moment to make the decision to push him away. As much as her brain tells her that pushing him away is exactly what she should do, the rest of her body isn't getting the message. No, her traitorous body is craving the same kind of explosive sex that the song is still droning on about in the background. Adam’s warm breath fans her face as he leans over until their lips are just skimming the others.
He growls. “ I've wanted to do this since the moment I saw you pointing that gun at me.”
In a flash, his lips are crushing hers in a bruising kiss. Then, he’s running the tip of his tongue along the seam of her lips until she gasps at the tingling sensation. He doesn't waste the opportunity to thrust his tongue inside her mouth. The wet, silky length slides against her own in a way that feels so carnal that it makes her body heat instantly for him. As he kisses her thoroughly and sensually, unlike anything she could have ever dreamed of before, he lets go of her neck to slide his hand down the sensitive length of her body.
Rubbing the side of her breast on his path down to grasp both cheeks of her ass fiercely, he turns them around so that her back hits the wall behind them. He lifts her until the V of her thighs cradles the hard length of him and she wraps her legs around his waist, pulling him tighter against her now rolling hips. Their bodies are pressed so intimately together, not even air separates them. Her nipples harden against the feel of his chest subtly rubbing them, causing him to groan into her mouth.
Jenna feels her body hum with excitement, begging for more. With one hand clenched in his gorgeous, auburn hair and the other fisting his shirt, she rocks her core against him. Suddenly wishing that they’re somewhere much more private and with a lot less clothes on. Every nerve ending in her body that lay dormant through the years of self-denial flares with sensation, urging her to finally give in and indulge in the ultimate forbidden act. Her wolf is practically rabid with the possibility of how it could be between her and the Alpha erotically pressed to the front of her. Demanding her physical attention. Her submission. What would sex be like between them?

until next time <3
j