“Is that why you were living in the same city as me and you never came to see me?” I asked a little bit more accusatorially than I meant to. “Why didn’t Mandy call me or come to see me?”
His jaw seemed to harden as he looked over the top of his sunglasses. “Do you want to know about me or Mandy?”
I rolled my eyes. “You know what I mean.”
“Maybe I was just admiring you from afar as I always have.” Revell merged onto the highway in the direction of Crossroads.
I snorted. “What’s Mandy’s excuse?”
Revell took one hand off the steering wheel and rubbed the back of his neck. “She took Daddy’s death hard and she’s been busy with school there.”
“So for some reason, which you won’t explain to me, one of few people I consider a true and loyal friend came to live in my home town and she didn’t even want to see me?”
Revell sighed. “Since you didn’t come here when Daddy died, maybe she thought your friendship was over.”
“Is that what you thought? That our friendship was over?”
“We weren’t friends, Scarlett, don’t fool yourself into believing that!”
“Then I’d like to know what we were?” I countered angrily.
He wouldn’t look at me, and his voice was rough and tense when he spoke. “You knew I’ve wanted you in every way a man can want a woman since you were fifteen.”
“Friendship is better than nothing, especially when what you wanted to happen between us was completely inappropriate.”
“It was only wrong if it was one sided or if I’d acted on it when you were under age.”
“The summer I was fifteen and Mamaw found us in the deer stand you came pretty close to you going to jail.”
“The age of consent in Alabama is bit lower than it is up North.”
“You were twenty, it was a crush on an older man on my part. What was it on your part?”
Revell paused, turned, and looked me up and down. “It was I’m going to rot in hell because I want a minor or I’m going to die a slow death because I don’t believe I can live without her.”
I grumbled in disbelief, “And yet here you are perfectly healthy and happy.”
“You were the one who just said that I don’t smile the way I used to.”
I moved away from his ire closer to the door. “Are you blaming me?”
“I’m not blaming anyone, I’m just trying to tell you how I feel because you wouldn’t let me tell you back then, and you never came back to let me explain how it was.” Revell sighed. “Why didn’t you come when I wrote you?”
“I couldn’t.”
“Couldn’t or wouldn’t?”
“Couldn’t, Revell, couldn’t.”

Add Stained to your GOODREADS want to read list!

Windy City writer, Elizabeth Marx, brings cosmopolitan life alive in her fiction—a blend of romance, fast-paced Chicago living, and a sprinkle of magical realism. Elizabeth resides with her husband, girls, and two cats who’ve spelled everyone into believing they’re really dogs. She grew up in the city, has traveled extensively, and still says there’s no town like Chi-Town. 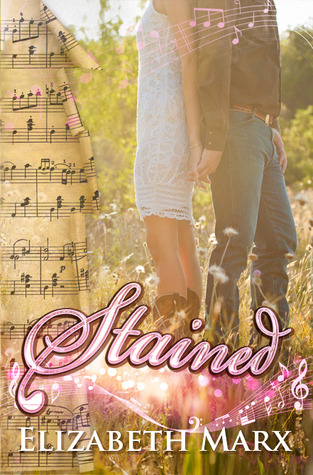 What happens when your darkest truth is revealed to the world?

Scarlett Marbry was just sixteen when her mother, an acclaimed Sacred Harp singer, committed suicide in front of her, sending her running from rural Alabama and the darkness that pushed her mother over the edge. Now, after five years of building a fragile cage around her heart to protect herself, she must return to Crossroads for her grandparents’ funeral. There, she’ll not only be forced to deal with the reality of her deep Southern roots, but she’ll have to face the one she left behind.

Revell Marshall is used to working with fragile objects. He’s built a life and career around reassembling the delicate stained glass windows that have put Crossroads back on the map. He’s also been pining for Scarlett all these years . . . Determined to win her heart, he helps her piece together the facts of her mother’s past. Except these revelations, once exposed, could set Scarlett on the downward spiral she barely escaped the last time. Especially when the truth that stained the past may be the same one that shatters her faith in the one person she thought she could trust . . .

It's already on my TBR, how about yours?!

Pre-Order it, add it to your TBR