Reflect Me by K.B. Webb 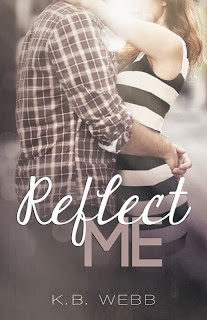 If you're looking for a story about a sweet, innocent virgin who rides off into the sunset with a reformed bad boy, then you're looking in the wrong place.

Some people don’t get a happily ever after. Molly Scott is one of those people, and she knows it. With the kind of past that she has, and the secrets that she holds, she knows that even if she found Prince Charming, he wouldn’t want her. She refuses to dwell on her less than ideal situation though. This is her life, no point in complaining.

Logan Wade had his life planned out, until all his dreams came crashing down around him. Now, he’s come back to the town he swore he would never see again to start fresh. He has no plans to ever settle down again, that’s how he ended up back here in the first place.

When Molly and Logan meet, they are forced to rethink the lives they thought they knew and the futures they were so sure they wanted. Suddenly, Molly wonders if there is a better life outside of the hell she has built for herself, and Logan begins to rethink his resistance towards settling down again.

They say love conquers all, but Molly and Logan are about to find out that sometimes love just isn’t enough.

K.B. Webb is an up and coming author from a small town in Louisiana. She has a slight obsession with all forms of music from the 90's and anything labeled 'Texas Country.' She spends her days behind a desk writing chapters in her head, and her nights chasing around her adorable two year old daughter, insane dog, and cooking for her country boy husband.  Reflect Me is her first novel.

Molly had claimed me the night she met me. The night she looked into my eyes and I could read her broken soul like a book you read over and over even, even though you know the story by heart. She claimed me the first time I heard that amazing voice she had, singing songs that were meant for the sad and lonely. She claimed me the night she took a chance on a guy she barely knew and agreed to be my friend. Molly had claimed me with the first look, the first breath, the first word. She had set up camp in my head and my heart, and I had no plans of doing a damn thing about it. I would help Molly get over the mountain of issues she felt she had, because she was worth it; she would always be worth it. I didn’t know all about Molly’s past; there were holes in some of her stories, but I didn’t want Molly’s past; I wanted her future. And no matter how long it took, how hard I had to fight, Molly would eventually be mine. One day, I would be lucky enough to wake up next to this woman, who I was quickly realizing, I couldn’t live without.