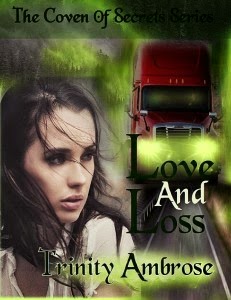 Jo Kelley is not your average college student, but she's trying to be. Years in foster care have left her cautious. She doesn't let many people in and there are very few people she would ever trust with her secrets…namely that she sees impossible things, things that terrify her and make her question her own sanity.
But Jo is putting all that aside, and embarking on a typically American rite of passage… spring break. With her best friend and her new boyfriend, Jo is setting out for adventure. Little does she know that her life and the lives of everyone around her are going to change dramatically.
There's something dark buried in Jo's past, secrets and an unfathomable evil that are clawing their way to the surface. Intent on destroying Jo and the rest of the world with her, Jo will have to come out of the proverbial broom closet and use all of her as yet untapped power to battle the forces of darkness and save the people she loves.

Tragic Accident Claims Two, Infant Only Survivor
The first witness on the scene claims to have only seen the family’s blue station wagon on the side of the road when he happened upon the accident. The vehicle appeared all beaten up on the driver's side and its lights remained on so the driver had slowed to see if there was help needed. After investigating the car, one Larry Flinch noticed a small baby clapping its hands, still buckled in the back seat. The father’s body, draped down towards the child in one last attempt to comfort her, the mother laid lifeless yards away. After the tragedy, we contacted Mr. Flinch and asked him what his recollection of the accident was.
“Well, of course I called the police right away but being by myself, I didn’t know what to do with the toddler. After seeing she was unharmed, I stood right outside her window until help arrived. I was scared to move her after what she must have been through. She didn’t seem scared at all considering; such a brave kid.”
Indeed, this sole survivor was found to be unscathed and was immediately taken away by Social Services where they will see if there is a next of kin. The parents, later said to be Mr. and Mrs. Joe Kelley, have no family in the area that they have found as of yet but the police are still looking into the matter. No one has come forth in what is being called a “hit and run” but police have evidence that they wish not to discuss at this time.
This reporter was truly heart broken by the sight of the wreckage out on HWY 5 but out of this great loss there is still a life that was spared and it makes you feel that God must really have a plan for this sole survivor.

I suck and haven't been on schedule with my reading :( This book is going to be read this week, so as soon as I have it read I will post my review as Part 2 for this post!!

“Were you not listening? That kind of magic has a price. Because of what we did, your parents are both dead!” Dawn raised from the pavement and gripped my shoulders. “No good can ever come from that kind of magic. There just has to be another way.”
“The only way for us all to be free of Loki is to destroy him. Unless you have another story you’re not telling me with a spell that will vanquish him for good.” I had my hands on my hips and I was bent down in order to look her right in the eyes when a blast of her power hit me. It was like a dry sand storm had just smacked me in the chest and I had to rub my eyes to rehydrate them.
“You listen to me!” Dawn had her finger pointed right at my chest and she was taking quick jabs to my sternum. “I may not be your Mother but I will not see things end for you the way it did for her! If I could protect you on my own, I would take you away from here and hide you till next month comes and goes!” She was now making wild gestures with her hands. “Screw Steve; screw the Coven! I just want to keep you safe…I owe Sunny that much…” her words trailed off as she turned her back on me and started walking towards the woods.
“Hey, where are you going! I’m not a child you know, I can take care of myself!” I yelled at her back side. She turned around so quick the motion was a blur and she put her hands out in front of her. Another dry sand blast hit me square in the chest and I flew back a short distance to land on my butt hard in the grass.
“Jo!” I heard Marty yell from somewhere behind me but I ignored her as I scrambled off the ground. I looked where my aunt had been standing but she was no where to be seen. What the heck had just happened?