#Spotlight | Rarity from the Hollow by Robert Eggleton

I love the tag on this cover!  "A children's story. For adults." It makes me giggle each time I see it.  Have you read this one, I haven't, let me know what you think in the comments! 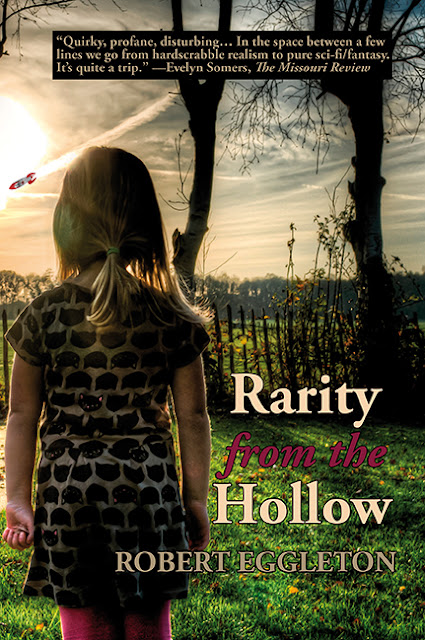 Rarity from the Hollow is adult literary science fiction filled with tragedy, comedy and satire. The story includes elements of fantasy, everyday horror, paranormal, romance, mystery, and adventure. The content addresses social issues – poverty, child maltreatment, and the medicinal use of marijuana. This novel is not for the prudish, fainthearted or easily offended.
This is a children’s story for adults. While the protagonist, Lacy Dawn, occupies the body of an eleven year old, and sounds like one, she has evolved under the supervision of Universal Management for hundreds of thousand of years. She is not a typical little girl, and if you think of her as such, you may be shocked.
Lacy Dawn is the true daughter of Appalachia, and then some. She lives in a hollow with her worn-out mom, her Iraq War disabled dad, and her mutt Brownie, a dog who’s very skilled at laying fiber optic cable. Lacy Dawn’s android boyfriend has come to the hollow with a mission. His equipment includes infomercial videos of Earth’s earliest proto-humans from millennia ago. He was sent by the Manager of the Mall on planet Shptiludrp (Shop ’till You Drop): he must recruit Lacy Dawn to save the Universe in exchange for the designation of Earth as a planet which is eligible for continued existence within a universal economic structure that exploits underdeveloped planets for their mineral content. Lacy Dawn’s magic enables her to save the universe, Earth, and, most importantly, her own family.

you can pick up your copy at Amazon, B&N, & Dog Horn Publishing

Robert Eggleton has served as a children's advocate in an impoverished state for over forty years. He is best known for his investigative reports about children’s programs, most of which were published by the West Virginia Supreme Court where he worked from 1982 through 1997, and which also included publication of models of serving disadvantaged and homeless children in the community instead of in large institutions, research into foster care drift involving children bouncing from one home to the next -- never finding a permanent loving family, and statistical reports on the occurrence and correlates of child abuse and delinquency. Today, he is a recently retired children's psychotherapist from the mental health center in Charleston, West Virginia, where he specialized in helping victims cope with and overcome physical and sexual abuse, and other mental health concerns. Rarity from the Hollow is his debut novel and its release followed publication of three short Lacy Dawn Adventures in magazines: Wingspan Quarterly, Beyond Centauri, and Atomjack Science Fiction. Author proceeds have been donated to a child abuse prevention program operated by Children’s Home Society of West Virginia. http://www.childhswv.org/ Robert continues to write fiction with new adventures based on a protagonist that is a composite character of children that he met when delivering group therapy services. The overall theme of his stories remains victimization to empowerment.

until next time, xo
~jen